Photo by Willem Ytsma ‘16 | The Lafayette 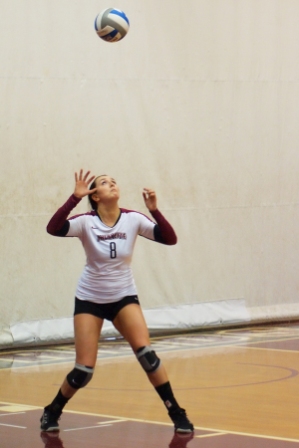 Out with the old, in with the new. The Lafayette volleyball team is hoping a remodeled Kirby Sports Center will set the foundation for rebuilding after last season’s nightmarish collapse.

Lafayette started its season 6-1, including four wins at home, before winning just three of its last 19 games. Nine straight losses capped the season. But now, with a new home and a fresh start, the team is optimistic for the upcoming season.
Up first is the La Salle Tournament in Philadelphia tomorrow and Sunday. There, the team will take on Sacramento State and La Salle in a double header tomorrow before finishing off the tournament against Fairleigh Dickinson on Sunday.
Upon returning home, the team will at long last get the opportunity to unveil its new home on September 6 against Wright State at 6 p.m. While Head Coach Terri Dadio Campbell acknowledged that nothing changes between the lines, she has taken notice of the new building’s advantages.
“It’s a beautiful facility, great to show off to recruits and certainly will enhance the atmosphere,” Campbell said.
Seniors Karissa Ciliento and Molly Belcher look to step up and take control of the leadership and on-the-court performance of recently graduated Sarah Frohnapfel ‘13 and Katie Zoller ‘13. Ciliento led the team in kills last season, tallying 241 total.
This past offseason was viewed as critical to the team’s success. Campbell was more than pleased with her team’s work.
“They really busted it out in the weight room and on their conditioning test which allowed us to focus more on the volleyball side of things,” Campbell said.
The team will rely heavily on a strong junior class led by Michelle Woodworth and Katy Rooney. Woodworth led the team in digs last season with 330. Rooney appears primed to take that step and improve upon her 123-kill season. Aidan Guilfoyle ‘15 suffered an injury-riddled season, so staying healthy will be key.
Sam Volk ‘17 headlines a strong freshman class that will increase depth throughout the roster.
Early on this season, Campbell will be particularly interested in finding the best mix of players to start for Patriot League play.
“With three tournaments before Patriot Leagues, we have a chance to work out different lineups and see who is going to blossom into different roles,” Campbell said.

View all posts by Brett Lederer →